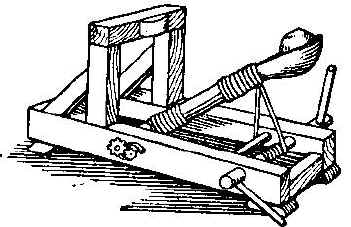 When you read the first book of the EngiNerds series (you are going to read it, right?!), you’ll find that catapults play a major role in the story, and I wouldn’t be too surprised if reading about them gets you itching to build your very own. The EngiNerds build their catapults using nothing but chopsticks and rubber bands, and while I’d love to share their design with you, that information is TOP SECRET. It took forever to get the guys to share it with me, and I’m the one who created them!

Fortunately, there are loads of great catapult designs available for FREE on the Internet. But first – some nifty history about the catapult . . .

Catapults are known as siege engines, and have been around since ancient times. They are primarily used to launch heavy objects great distances, either at or over things, and all without the use of explosives.

Catapults come in every size imaginable. Technically, your basic everyday slingshot is a catapult. It relies on the same sort of physics that larger catapults do. And believe me – catapults can get absolutely GINORMOUS. These weapons, after all, were used to throw projectiles weighing hundreds of pounds (often big rocks, but also sometimes piles of rotten garbage) at targets that were hundreds of yards away (like an enemy’s castle or city walls).

But catapults weren’t only used during battle. Thousands of years ago, the Greeks – who were, arguably, some of the very first EngiNerds – understood that playing around with catapults could be lots of fun. And so they held catapult-shooting competitions, and even had special contests just for the kids. (The EngiNerds would’ve loved that.)

If you’ve never built a catapult before, you may be daunted by the idea of doing so. But as mentioned above, catapults come in all sizes, and you may be surprised (and pleased!) to learn that you can make dozens of different small-scale siege engines using nothing other than some fairly common household items. Here are just two websites that offer up several such sets of catapult-building instructions:

Spaghetti Box Kids also provides a handy chart to help determine which catapult design might be best for your kid and/or you to tackle, as well as some great ideas for games that can be played once the catapult is up and running (or, I guess, built and launching).

Over the course of the next few weeks, leading up to the publication of EngiNerds, I’ll be constructing some of my own catapults using these and other designs I’ve found. I doubt any of my catapults will be very useful should I need to defend my town against a horde of hungry robots. But still, it ought to be a good time.

Psst. If you’re still feeling desperate for more siege engine-related fun, check this out. It’s the music video for the one-of-a-kind band Zammuto’s song “Io.” In it, you’ll see band members, along with their families and friends, build – and then put to thrilling use – an enormous trebuchet (another type of siege engine popular throughout history).